The Simple Guide to Productionizing Data Workflows with Docker

In this walkthrough, we’ll provide an end-to-end minimal example of how to package Python work into Docker containers for production. 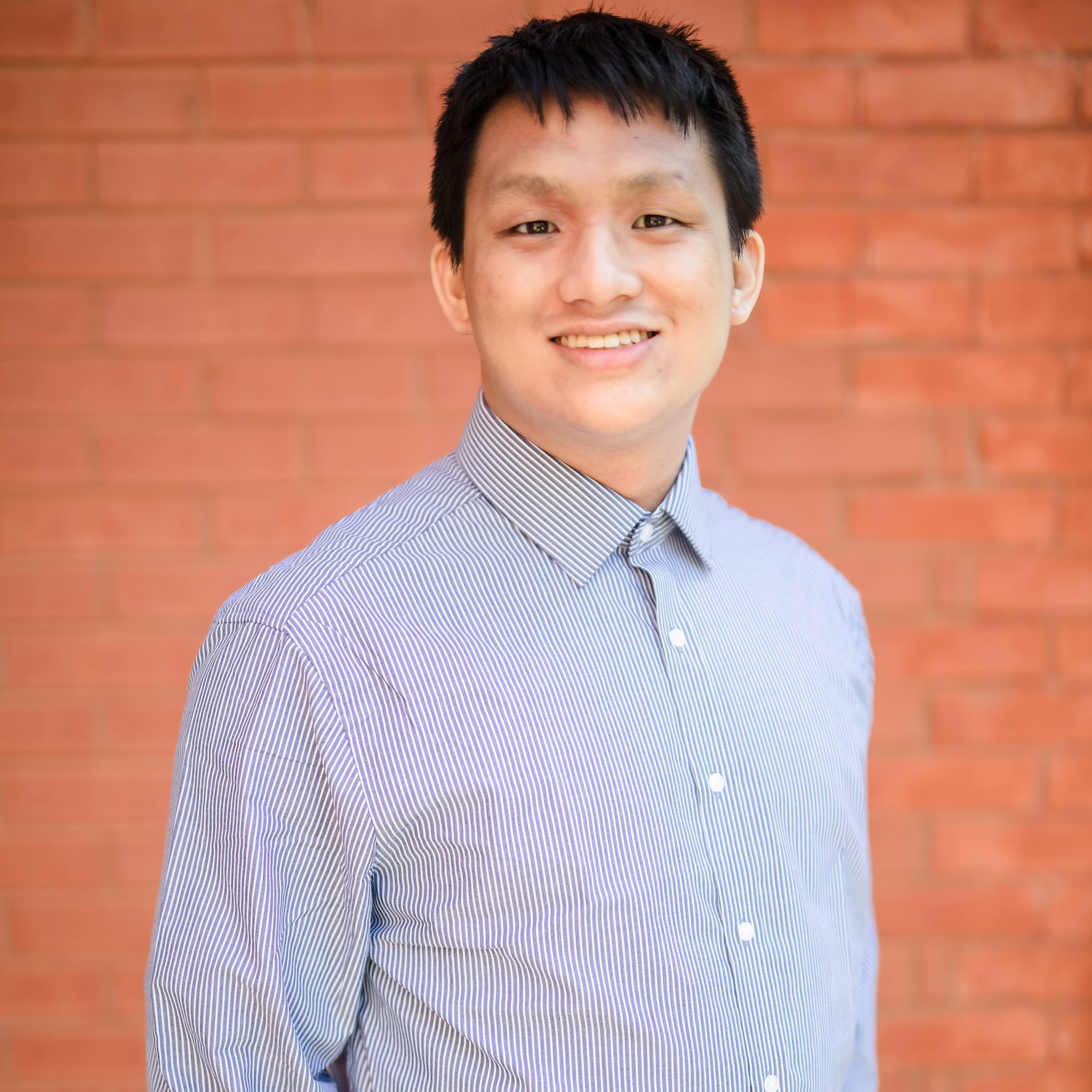 Outline
Motivation
Data scientists and analysts often shy away from packaging their Python work into Docker containers for production. From our experience in supporting the Prefect community, a lot of data professionals have the mistaken impression that Python packaging and building a Docker container is too hard a task for them to attempt. Oftentimes it boils down to taking the first step and they don’t know where to start. In this walkthrough, we’ll provide an end-to-end minimal example of how to do it.
It is widely known that using a container provides an isolated environment to run workflows consistently, but there are other practical benefits gained by using containers.
Making a Python Package
We’ll start by making a Python package. But before that, we’ll show what the final directory structure will look like below. These files and directories will be described one-by-one. We’ll start with the components and workflow folders, and then go into the requirements.txt, setup.py, and the Dockerfile.
All of the code can be found here so there’s no need to create these files yourself.
mypackage/ ├── components/ │ ├── __init__.py │ ├── componentA.py │ ├── componentB.py ├── workflow/ │ ├── flow.py ├── requirements.txt ├── Dockerfile └── setup.py
Components
The most common use case that Prefect community members encounter is wanting to port over a set of common utilities and functions to their execution environment. The components folder in the directory structure above represents these common functions needed by our application.
If you find that components are being reused across multiple projects, it might be worth abstracting them out into their own package. Moreover, putting common logic into a package allows it to be imported regardless of the present working directory, which makes life easier when running within a Docker container.
Here we define some quick classes in our component files. This is just simple Python. The goal is to create something that we can import within our main Python script.

This file will just be empty. The presence of this file tells Python that this directory represents a submodule. For example, mypy and pytest require empty __init__.py files to interpret the code structure. For more information, see this StackOverflow post.
Workflow
This folder in the directory structure above will hold our main application. The code for flow.py can be seen below. In it, we have a basic Prefect Flow, but you don’t need to know Prefect here (but we’ll explain a bit). The main point is that we imported ComponentA and ComponentB, and used it in a Python script. 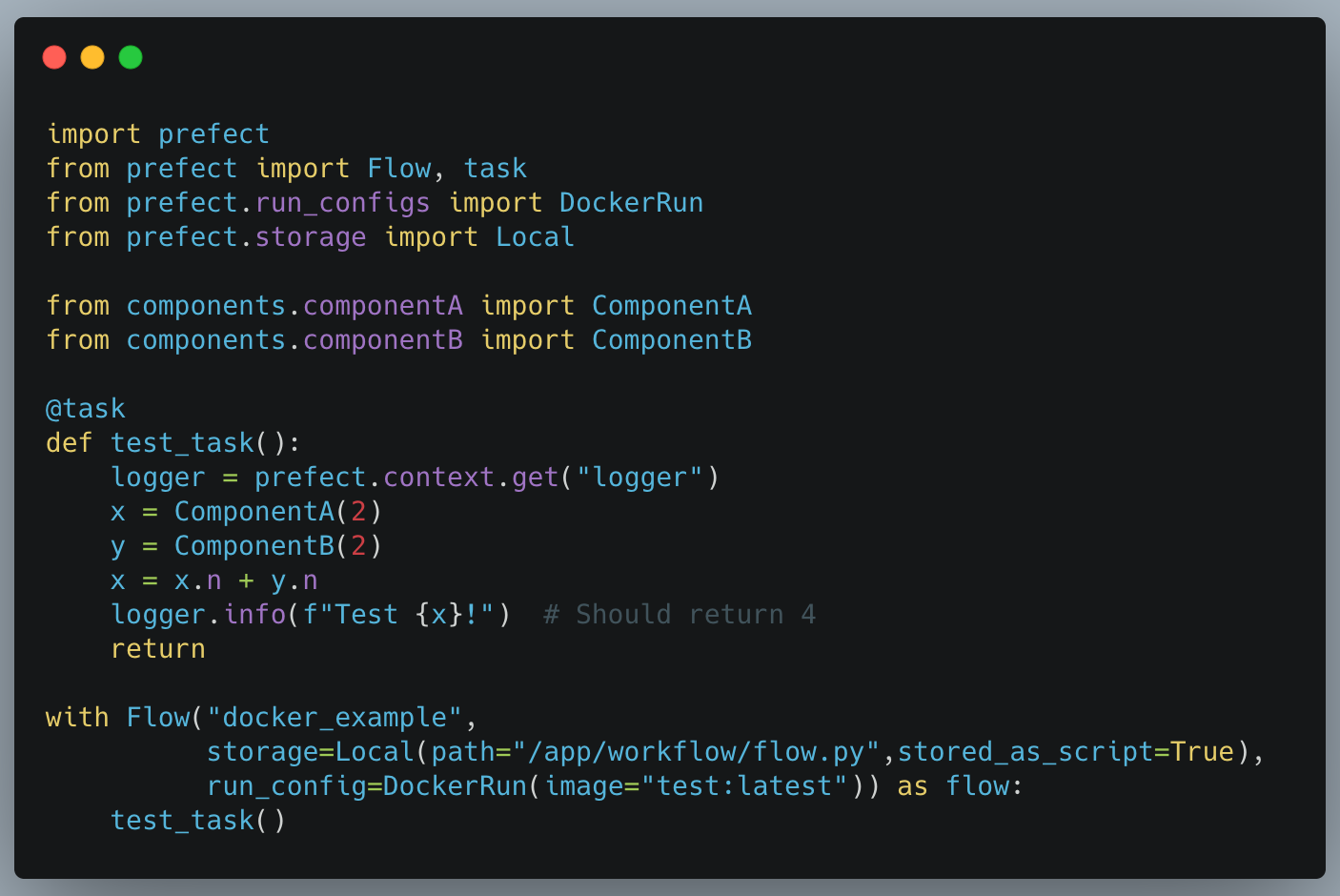 For those that are curious, Prefect is a workflow orchestration system that schedules and monitors workflows. Prefect flows represent the entire end-to-end logic (like Python scripts), while tasks, defined with the @task decorator, represent the individual components of a workflow (like functions).
Prefect is general-purpose and is capable of running flows that range from ETL to Machine Learning jobs. Anything that can be written in Python can be orchestrated with Prefect. Once deployed, our flow above will use the test:latest image when run (as specified in the configuration of DockerRun).
Requirements
The requirements.txt file should be familiar to most users. It holds all of the Python requirements you need to run the code. Ideally, requirements should be versioned, otherwise, you can get upgraded versions the next time you install them. For this workflow, we only have one requirement.

prefect==0.15.4
You can create this file for your project with the following command, which will output all of your packages into the requirements.txt file.
pip freeze > requirements.txt
The setup.py File
Everything so far is probably not new. We created some Python classes, imported them into the flow.py file, and then created our requirements. The setup.py is what might be new for some users. This file will tell pip how to install our package. 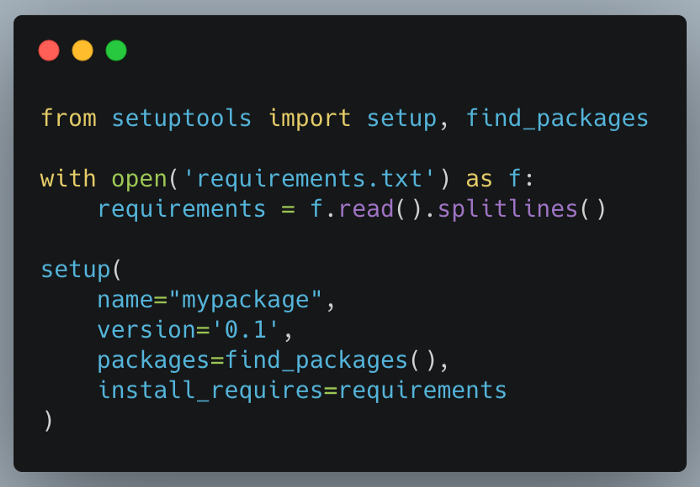 With this file, we can now install our package locally with pip install -e . . Our setup.py here is pretty minimal. The package name and version are used by pip to keep track of the package, but they don’t affect how the package is used in Python code. The find_packages function call goes through the subdirectories with an __init__.py and includes them in mypackage. Note that workflow/flow.py will not be included in the library because there is no __init__.py in the workflow folder.
The -e in pip install -e .tells pip to install the library in development mode, so that edits to the code can take effect without re-installing.
The requirements.txt file is read in and then passed to the setup function. This tells pip to install those dependencies along with our package. With that, we now have a Python library that we can install on other machines as long as we copy the code over.
Writing a Dockerfile
This is the last part of our codebase. The goal is to copy over our Python package that we just created and installed. We’ll show the code and then go over it line by line. 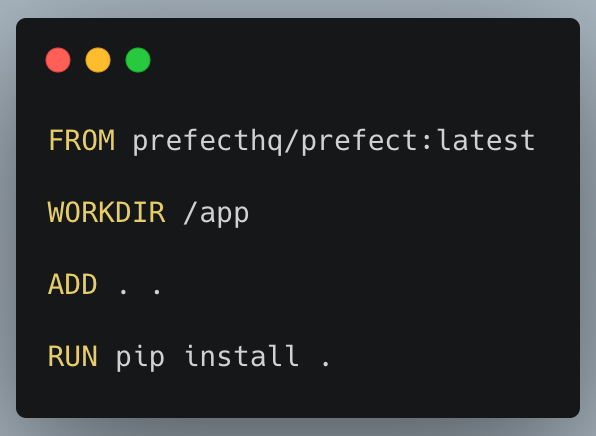 Building an Image
With the Dockerfile created, we can create the image from the root of the project. This can be done with the following command in the CLI. Note that this assumes you have Docker installed and it’s running.
docker build . -t test:latest
Now that the image has been created, you can push it to your registry (Dockerhub, AWS ECR, etc.) using the docker push command. These registries will have different ways to do it so we won’t cover it here.
Using the image
In order to run the image interactively,
docker run --name mycontainername -i -t test:latest sh
and from here, you should be in the app directory and you can run:
python workflow/flow.py
Conclusion
In this walkthrough, we have gone through how to create a Python package by including the requirements.txt and setup.py files. We were then able to copy it over into a Docker image and install it for general use.
Having the image working on a local machine provides some benefits already, but the image will likely be needed to be uploaded to a registry for production use cases.
CONTACT US